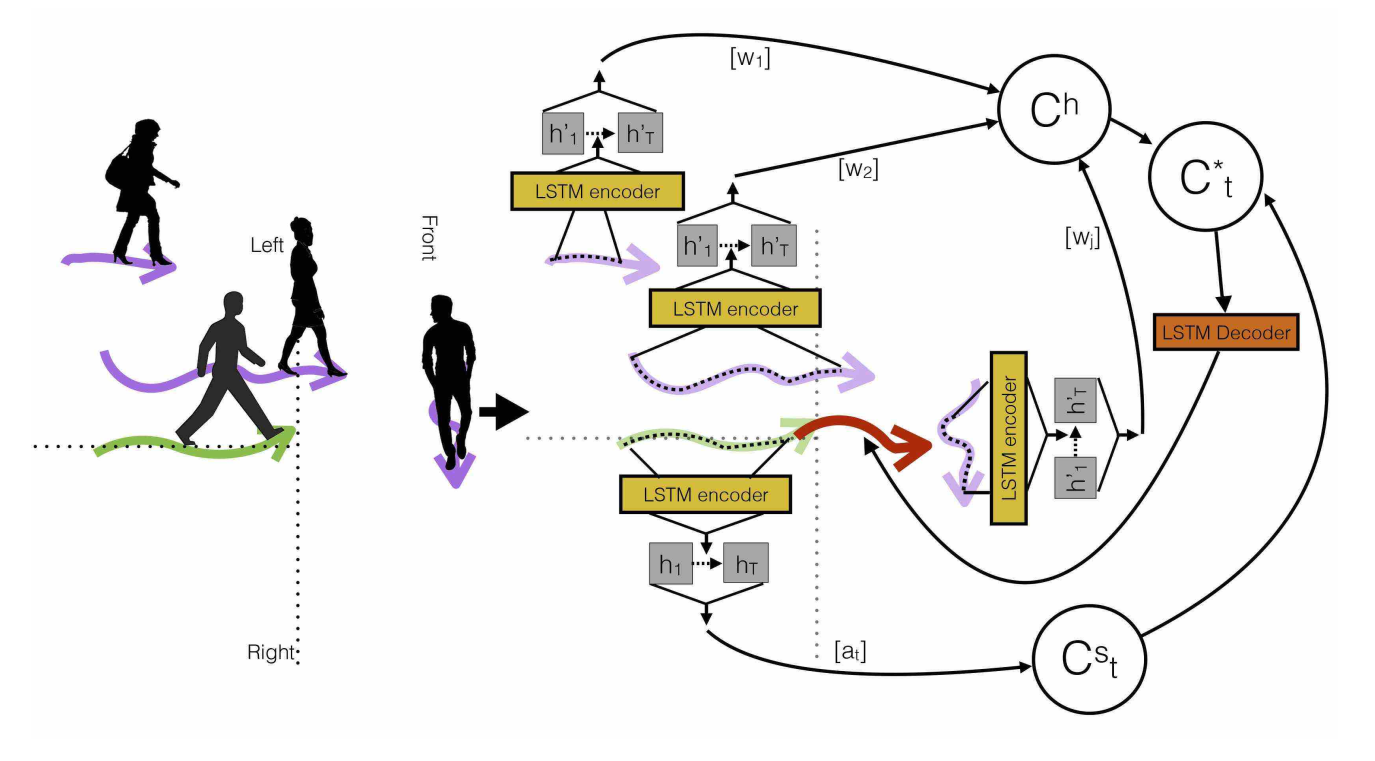 we propose a novel method to predict the future motion of a pedestrian given a short history of their, and their neighbours, past behaviour. The novelty of the proposed method is the combined attention model which utilises both “soft attention” as well as “hard-wired” attention in order to map the trajectory information from the local neighbourhood to the future positions of the pedestrian of interest.

The approach we present in this paper can be viewed as a data driven approach which learns the relationship between neighbouring trajectories in an unsupervise manner.

A sample surveillance scene (on the left): The trajectory of the pedestrian of interest is shown in green, and has two neighbours (shown in purple) to the left, one in front and none on right. 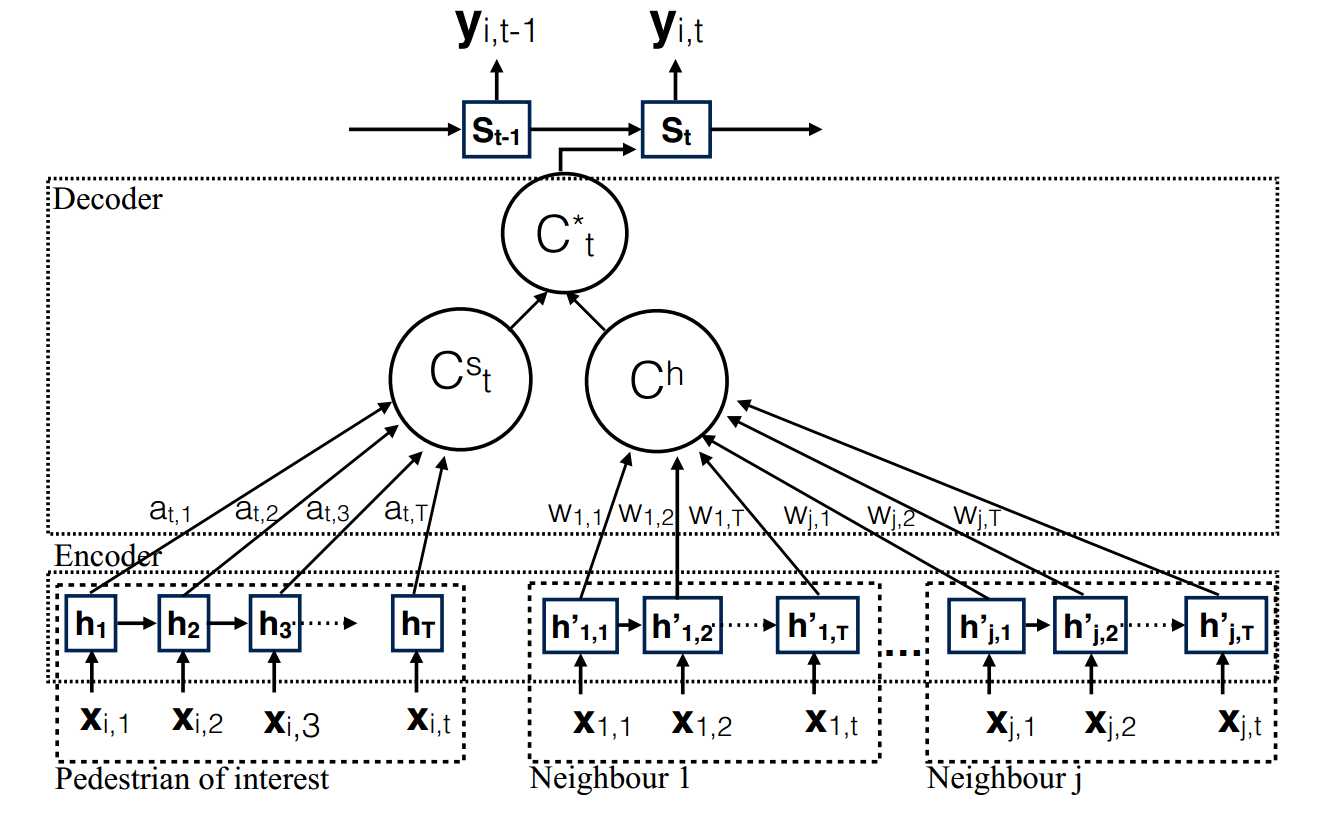 We utilise the trajectory information from both the pedestrian of interest and the neighbouring trajectories. We embed the trajectory information from the pedestrian of interest with the soft attention context vector , while neighbouring trajectories are embedded with the aid of a hardwired attention context vector . In order to generate we use a soft attention function denoted in the above figure, and the hardwired weights are denoted by . Then the merged context vector, , is used to predict the future state

The input sequence for the pedestrian is given by

The encoded sequence is given by,

The encoding function is an LSTM, which can be denoted by,

With the aid of above equation we encode tge trajectory information from hte pedestrian of interest as well as each trajectory in the local neighbourhood.

The soft attention context vector can be computed as a weighted sum of hidden states,

The weight can be computed by,

the function is a feed forward network for joint training with other components of the system.

Let there be neighbouring trajectories in the local neighbourhood and be
the encoded hidden state of the neighbour at the time instance, then the context vector for the hardwired attention model is defined as,

The simplest repesentation scheme can be given by,

where is the distance between the neighbour and the pedestrian of interest at the time instance.

We then employ a simple concatenation layer to combine the information from individual attentions. Hence the combined context vector can be denoted as,

where is refered to as the set of weights for concatenation.We learn this weight value also through back-propagation.

The final prediction can be computed as,

The given input trajectories in the training set are clustered used DBSCAN based on source and sink positions and we run an outlier detection algorithm for each cluster considering the entire trajectory.

In the training phase trajectories are clustered based on the entire trajectory and after clustering we learnt a separate trajectory prediction model for each generated cluster. When modelling the local neighbourhood of the pedestrians of interest, we have encoded the trajectories of those closest 10 neighbours in each direction, namely 165 front, left and right.

Comparison to the Social-LSTM model 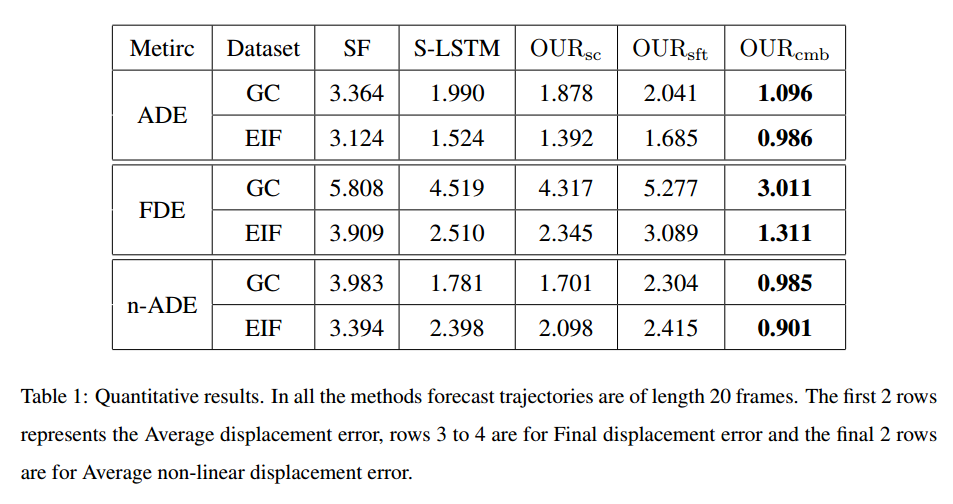 For the SF model, preferred speed, destination, and social grouping factors are used to model the agent behaviour.

For S-LSTM model a local neighbourhood of size 32px was considered and the hyper-parameters were set according to Alahi et al(2016).

In order to evaluate the strengths of the proposed model, we compare this combined attention model (OURcmb) and two variations on our proposed approach: 1) OURsft, 265 which ignore the neighbouring trajectories and considers only the soft attention component derived from the trajectory of the person of interest when making predictions; and 2) OURsc which omits the clustering stage such that only a single model (using combined attention weights) is learnt